Much of the world drinks alcohol in moderation, facing no long-term effects with just one or two 1-ounce drinks per day. When drinking alcohol becomes an addiction, it has physical, social, and psychological effects that can be both destructive and devastating for all involved. Not only can long-term alcohol abuse affect you, but it also influences those around you and the community at large. These are among the biggest effects you may face if you are dependent on alcohol.

You will hear many people say that alcoholism is a family problem. This is because long-term relationships are frequently influenced by one's addiction to alcohol. If you are in a romantic relationship, you may notice that your partner is unhappy with or critical of your drinking behavior.  Your relationship may suffer from poor communication, lack of intimacy, frequent criticism and increased anger. Marital abuse is also much more common in relationships where one party is an addict and the other is potentially considered an enabler or co-dependent.

Children are affected, emotionally and physically, by alcohol abuse in the home. Children who grow up with substance abuse in a home tend to experience more guilt, fear, anxiety, loneliness, and depression than their counterparts without addictions at home. Additionally, these children tend to grow up with lower self-esteem and experience problems like bedwetting more frequently. You may notice that your child struggles to maintain relationships with friends or grows to make poor decisions.

For women who drink alcohol while pregnant, Fetal Alcohol Syndrome (FAS) is the result of alcohol passed into the body of an unborn child. FAS causes physical and mental defects in children that are irreversible and often include facial abnormalities, brain damage, and slow growth. Thousands of children are influenced by this condition each year.

You may find yourself spending more money on alcohol as your dependency upon it grows. When the choice comes down to food or alcohol, you may find yourself leaning toward alcohol. Additionally, alcohol abuse may lead to low performance on the job or even absence from work, ultimately leading to losing the job altogether.

The most common physical effects of drinking large amounts of alcohol are those that even one session of binge drinking may induce. These include vomiting, dehydration, and even blacking out. You may wake up in the morning and not remember anything that happened the night before, or you may experience the side effects of a hangover: nausea, headache, and sensitivity to light. Drinking alcohol may also lead to weight gain and high blood pressure.

The long-term health effects of alcohol dependency are severe. In fact, heavy drinkers often experience liver damage, pancreatitis, memory problems, and problems with the immune system. Cirrhosis of the liver is among the most common health issue for alcohol addicts, and it may require a liver transplant to treat. If you drink heavily over a period of years, you may begin to experience nerve damage and slow relay of information from the body to the brain and vice versa. You may experience extensive memory loss and even seizures over time.

Heavy drinkers experience much more than cravings and urges to drink. They also often experience a lack of motivation and severe depression. This depression may cause drinkers to withdrawal from friends and family members, even those trying to help them. Depression may appear as much more than sadness. Those who experience depression may appear stoic, as if nothing affects them. Additionally, heavy drinkers may be in denial and isolate themselves as a coping mechanism. Social isolation is a common way of hiding from one's problems, as it requires no confrontation of issues like alcoholism or depression. It's also not uncommon for those with an addiction to alcohol to use drinking as a way to cope with anxiety or adjustment disorder, which is often brought upon by stressful situations like loss or change in employment, family conflicts, financial or legal problems or school activities.

It is vital to seek treatment for these reasons and so many more. Help is available!  Family therapy and individual treatment sessions can help you conquer your alcohol dependency.  It may be the right time to change the destructive patterns that are destroying your life. 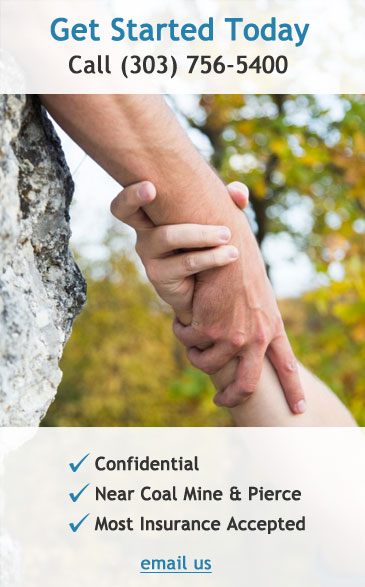